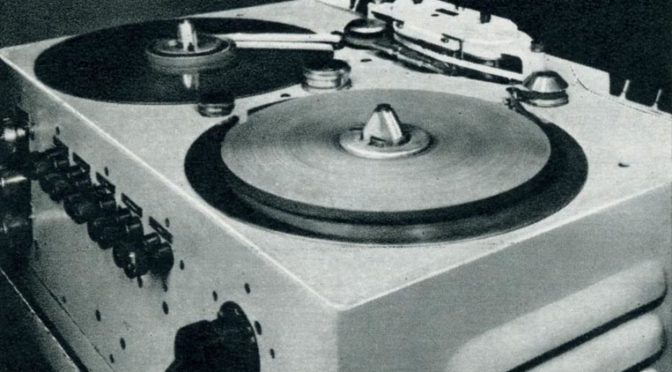 On the quality of old recordings…

In the milongas, only titles recorded after 1926 are used. Do you know why?

The first reason is not accurate. If in Buenos Aires the Guardia Vieja is very little disseminated, this is far from the situation in Europe. Let’s say that these recordings are often a little poor and average to dance, but they are broadcast in milongas when they were recorded after 1926…

The second is not accurate either. The combination of the different original rhythms, candombe, payador’s songs, habanera, canyengue, and others had already given birth to real tango (2X4 in particular). Some rather slow pieces were then accelerated and became milongas, others retained the character of the tango. So that’s not the second reason.

And yes, this is the third good solution. The first recordings were made by emitting sound in a collector’s pavilion, in order to concentrate the sound vibrations towards a needle that was engraving a furrow in a ductile material (such as wax).

Edison Phonograph 1877. He was recording on a tin cylinder. It was also used for reproduction.

Girard phonograph allowing the return of molded cylinders. It was mounted with a key (visible on the left of the image).

Recording of an Indian chief on a Gramophone in 1916

Orchestra recording in acoustics. Notice the large pavilion pointing to the recorder and how the musicians are « stacked » to be in front of the pavilion. The violinist in the foreground has a pavilion violin that gives a louder and more directional sound.

Orchestra recording in acoustics. In the cabin, the recorder on a wax disc.

In 1906, the invention of the microphone improved the system, but it was not until 1925 that electrical recording was born industrially.

The microphone is combined with an amplifier that allows the masters to be engraved with great precision (discs that will be used after casting to press the discs broadcast).

Victor Orchestra playing in front of a coal microphone

Backstage, the sound engineer monitors the engraving of the master’…

Let’s listen to the difference between acoustic and electric

Francisco Canaro’s orchestra has recorded the tango Caricias twice. Once in 1924, with an acoustic recording system and once in 1927, with an electronic system.